Adenovirus infection of calves (AVI cattle) as a disease was discovered in 1959 in the United States. This does not mean that it originated on the North American continent or spread from there throughout the world. This only means that the causative agent of the disease has been identified for the first time in the United States. Later, the adenovirus was identified in European countries and Japan. In the USSR, it was first isolated in Azerbaijan in 1967 and in the Moscow region in 1970.

What is adenovirus infection

Other names for the disease: adenoviral pneumoenteritis and adenoviral pneumonia of calves. Diseases are caused by DNA-containing viruses that are embedded in the cells of the body. So far, 62 strains of adenoviruses have been counted. They affect not only animals, but also people. 9 different strains have been isolated from cattle.

The virus causes a disease similar to the common cold when it enters the lungs. The intestinal form is characterized by diarrhea. But the mixed form is much more common.

Calves at the age of 0.5-4 months are most susceptible to AVI. Newborn calves rarely get sick. They are protected by antibodies obtained from colostrum.

The virus can be inactivated using a formalin solution of 0.3% and ethyl alcohol with a strength of 96%.

Viruses of all strains are very resistant to thermal effects. At a temperature of 56 ° C, they die only after an hour. Viruses are kept at 41 ° C for a week. This is how long an adenovirus infection lasts in a calf. But since it is difficult for an animal to withstand a high temperature plus diarrhea, very young calves have a high percentage of deaths.

Viruses are able to withstand freezing and thawing up to 3 times without losing activity. If the AVI outbreak occurred in the fall, then it is not necessary to expect that the pathogen will be inactivated in winter due to the cold. In the spring, you can expect the return of the disease. 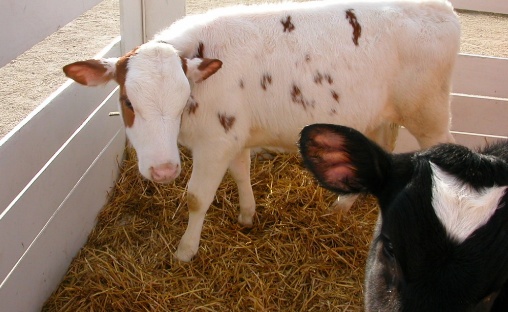 Sources of infection are animals that have recovered or are ill in a latent form. This is one of the reasons why young animals should not be kept with adult animals. In adult cows, adenovirus infection is asymptomatic, but they will be able to infect calves.

The virus is transmitted in several ways:

It is impossible to prevent the calf from eating the feces of an adult cow. Thus, he receives the microflora he needs. If a latent cow has an adenovirus infection, infection is inevitable.

Attention! A link has been observed between leukemia and cattle adenovirus infection.

All cows with leukemia were also infected with adenovirus. When it penetrates the mucous membrane, the virus enters the cells and begins to multiply. Later, along with the bloodstream, the virus spreads throughout the body, causing already visible manifestations of the disease.

The incubation period for adenovirus infection is 4-7 days. When affected by adenovirus, calves can develop three forms of the disease:

Most often, the disease begins with one of the forms and quickly flows into a mixed one.

Initially, discharge from the nose and eyes is clear, but quickly becomes mucopurulent or purulent.

Calves under 10 days of age receiving antibodies with the mother's colostrum do not show clinically adenovirus infection. But this does not mean that such calves are healthy. They can also be infected. 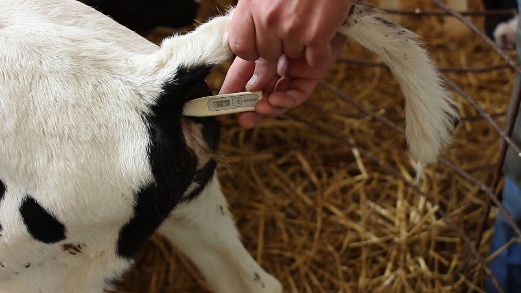 The course of the disease

The course of the disease may be;

Calves get sick with an acute form at the age of 2-3 weeks. As a rule, this is the intestinal form of adenoviral pneumoenteritis. It is characterized by severe diarrhea. Often, feces mixed with blood and mucus. Severe diarrhea makes the body dehydrated. With this form, the death of calves can reach 50-60% during the first 3 days of the disease. Calves die not because of the virus itself, but because of dehydration. In fact, this form of adenovirus infection is analogous to cholera in humans. You can save a calf if you manage to restore its water balance.

The latent form is observed in adult cows. It differs in that a sick animal is a virus carrier for a long time and can infect the rest of the livestock, including calves.

Adenovirus infection can be easily confused with other diseases that have the same symptoms:

An accurate diagnosis is made in the laboratory after virological and serological studies and taking into account the pathological changes in the body of the dead calves.

While the symptoms are similar, diseases also have differences. But in order to catch them, one must know well the signs of illness and the habits of the calves. Treatment should be started before the lab tests arrive.

He is also bovine parainfluenza and transport fever. Has 4 types of flow. Hyperacute is usually observed in calves up to 6 months old: severe depression, coma, death on the first day. This form has nothing to do with adenovirus infection. The acute form of parainfluenza is most similar to adenovirus:

With a subacute course, the symptoms are similar, but not so pronounced. They pass on the 7-10th day. In acute and subacute course, parainfluenza is easily confused with AVI cattle. Since the symptoms disappear, the owners do not treat the calves and bring them to a chronic course, which is also similar to adenovirus infection: stunting and developmental delay. 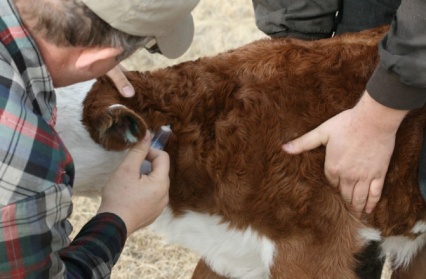 Symptoms of pasteurellosis can also include:

But if with adenovirus infection, small calves die on the 3rd day, and the older ones outwardly return to normal after a week, then with pasteurellosis, in the case of a subacute course, death occurs on the 7-8th day.

Important! Calves show signs similar to those of adenovirus infection during the first 3-4 days.

The similarity with adenoviral infection is attributed to:

But in this case, the prognosis is favorable. The disease in young animals goes away on the 5th day, in adult animals after 10 days. In a pregnant cow, an infection can cause an abortion.

Chlamydia in cattle can occur in five forms, but there are only three similarities with adenovirus infection:

Depending on the form, the number of deaths is different: from 15% to 100%. But the latter occurs in the form of encephalitis.

There are few signs similar to AVI cattle, but they are:

Treatment, as with AVI, is symptomatic.

Most animals recover on their own after 2 weeks.

When opening a corpse, note:

After a long illness, changes in the lungs caused by a secondary infection are also found. 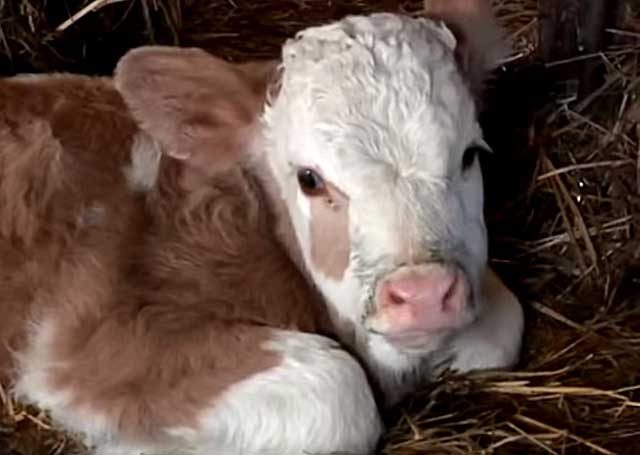 Since viruses are part of RNA, they cannot be treated. The body must cope on its own. Adenovirus infection of calves is no exception in this case. There is no cure for the disease. It is possible to carry out only a symptomatic auxiliary course that makes life easier for the calf:

But the virus itself remains in the cow for life. Since adult cattle are asymptomatic, the uterus can transmit the adenovirus to the calf.

Important! The temperature must be brought down to acceptable values.

To help the body in the fight against the virus, hyperimmune serum and serum from convalescent animals containing antibodies to adenovirus are used.

Adenoviruses infect not only animals but also humans. Moreover, scientists believe that some of the virus strains may be common. Adenoviruses belong to the group of acute respiratory viral diseases.

All animals do not tolerate heat well. They stop eating and die quickly. The picture is aggravated by diarrhea, which dehydrates the calf's body. These reasons explain the high mortality rate among young calves that have not yet accumulated "reserves" for a long fight against adenovirus infection.

If these two factors can be avoided, then the further prognosis is favorable. In a recovered animal, antibodies are formed in the blood, preventing re-infection of the calf.

Attention! Having recovered from the breeding gobies, it is better to feed them for meat.

The fact has not been proven, but adenovirus is isolated from the testicular tissues of recovered calves. And the virus is under "suspicion" of a violation of spermatogenesis.

Specific prophylaxis is still under development. While the general sanitary and veterinary principles are applied:

Due to the large number of virus strains, AVI immunoprophylaxis has been developed worse than for other viral diseases. This is due not only to a large number of strains, but also to the latent course of the disease in adult cows.

The search for means of protection against adenovirus infection today is carried out in 2 directions:

During the experiments, it turned out that the level of passive protection is very low, since calves with passive antibodies can be infected with adenovirus and transmit it to healthy animals. Protection with immune sera is impractical. Moreover, such protection is difficult to apply in mass quantities.

Vaccines have proven to be more reliable and stable in storage. On the territory of the CIS, monovaccines are used based on strains of two groups of adenoviruses and a bivalent vaccine, which is also used against pasteurellosis of cows. The monovaccine of queens is vaccinated twice at 7-8 months of pregnancy. The calf at birth gains resistance to AVI through the mother's colostrum. Immunity to adenovirus persists for 73-78 days. After the calves are vaccinated separately from the uterus. In order for the calf to begin to develop its own antibodies by the time the effect of the "borrowed" immunity ends, it is vaccinated for the first time in the period from 10 to 36 days of life. Re-vaccination is done 2 weeks after the first. 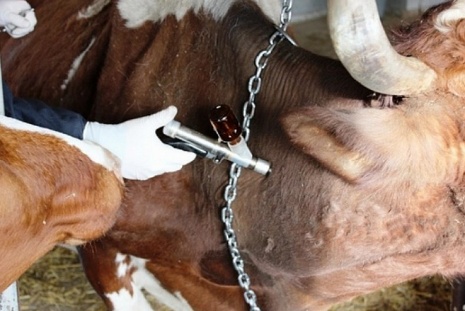 Adenovirus infection in calves, if the precautions are not taken, can cost the farmer the entire newly born livestock. Although this will not affect the amount of dairy products, due to insufficient knowledge of the virus, the veterinary service may impose a ban on the sale of milk.