The Bashkir duck, a peking duck from the Peking breed, was obtained as a result of an attempt to improve the Peking breed. When colored individuals began to appear in the Peking herd, they were separated and breeding began in themselves. The result was a new breed of pure-blooded Peking duck - the Bashkir colored duck.

Description of the breed 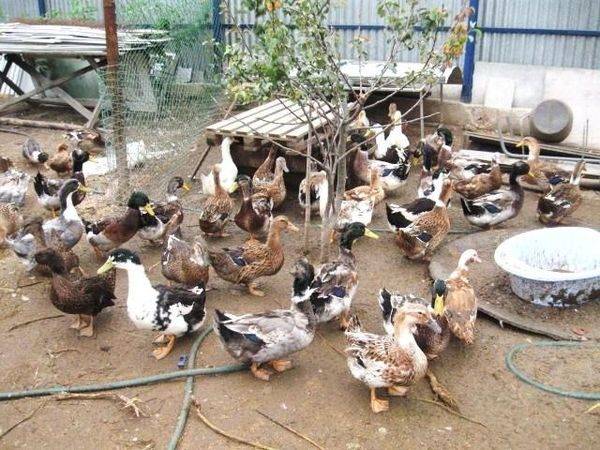 The characteristics of the Bashkir duck, its advantages and disadvantages are similar to those of the Peking breed. Drakes weigh 4 kg, ducks from 3 to 3.5 kg. For a meat breed, they have a fairly high egg production, about 120 eggs per year, weighing from 80 to 90 g. A really useful acquisition from a Bashkir duck is its frost resistance, which is useful in Russian conditions and which Peking do not differ.

The body of the ducks is tightly knit, massive. Able to withstand 4 kg of the weight of a drake, the paws are powerful, with thick bones, widely spaced.

The advantages of the breed include:

Although you can find on the Internet claims that the meat of the Bashkir duck is less fatty than that of the Peking duck, this is not the case. According to the ducks who tried to breed both breeds, the technical characteristics of both breeds are the same. Except for cold resistance. However, if it were not necessary to deduce duck breedresistant to the Russian cold, there would be no attempt to improve the Peking breed. And such a variety of Peking as the Bashkir colored duck simply would not have been born.

The disadvantages of the Bashkir duck include:

All mallards differ in the latter, so there is only "to understand and forgive." Or start an Indoor.

Comment! In Bashkiria, an industrial meat cross of ducks was recently bred, named the blue favorite. It is sometimes called the Bashkir blue duck. This is not the same as the Bashkir colored one.

In this photo, the blue favorite, not the Bashkir breed of ducks 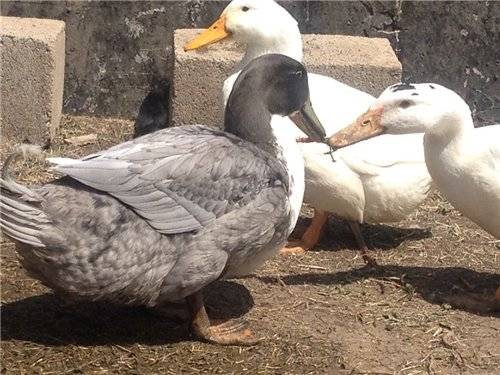 However, at the Blagovarskaya factory, they also brought out a favorite of a different color - red. This species of ducks has a brick-colored feather. Otherwise, they do not differ from the blue favorite and are not an old breed of Bashkir ducks either.

In the photo, a duck of the Bashkir breed piebald color based on khaki 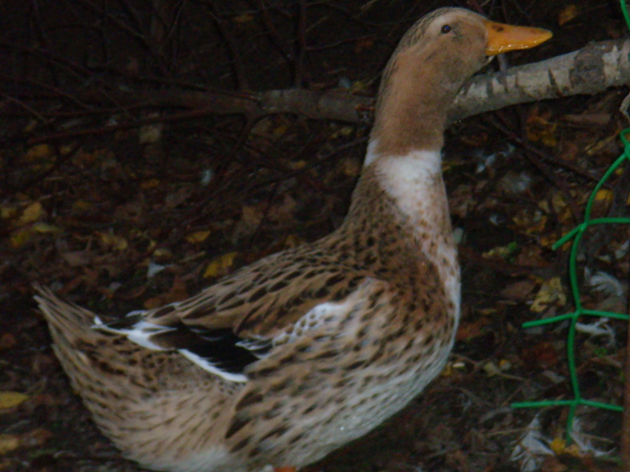 Bashkir ducks of white color do not exist and this can also be counted among their disadvantages, since, according to the observations of farmers, the carcasses of grayish ducks are sold poorly. Worse than white Peking ducks. But live ducklings, on the contrary, are in demand more than Beijing ones. But they take them not for industrial breeding, but for themselves.

In the photo, you can clearly see the standard colors of both black ducks and khaki. 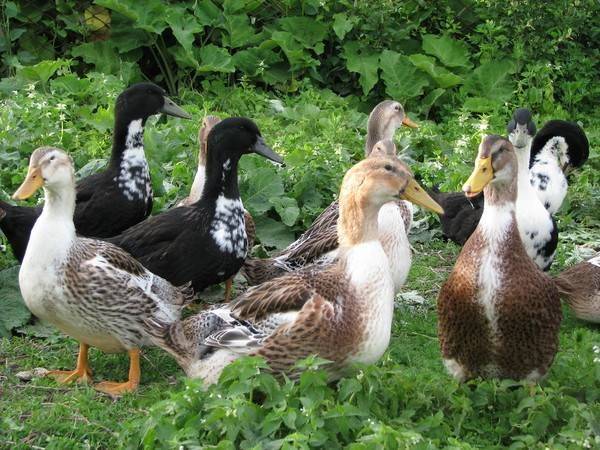 The color of the beaks depends on the color of the feather. The khaki-based piebald beaks are the same color as those of wild mallards: in drakes with a green tint, in ducks they are yellow or brownish-yellow. Black white-breasted beaks are black.


Although Bashkir ducks are undemanding to the conditions of detention, it will also not work to do nothing at all to equip them. In particular, this breed of ducks needs a lot of water.For drinking, they must be provided with free access to fresh, clean water. And, if possible, arrange a reservoir for them.

For wintering, ducks are provided with a deep bedding on the floor, you cannot put a bath in the shed, all the water will be on the floor. Drinking bowls in the barn are also needed, from which the ducks will not be able to pour water, that is, nipple.

Advice! The litter of ducks needs to be agitated daily.

Ducks trample down any bedding material very strongly, contaminating it from above with liquid droppings. The result is a wet litter on top, flooded with droppings, on which ducks trample, and below a completely dry litter material, since due to strong compaction moisture cannot penetrate into the lower layers. 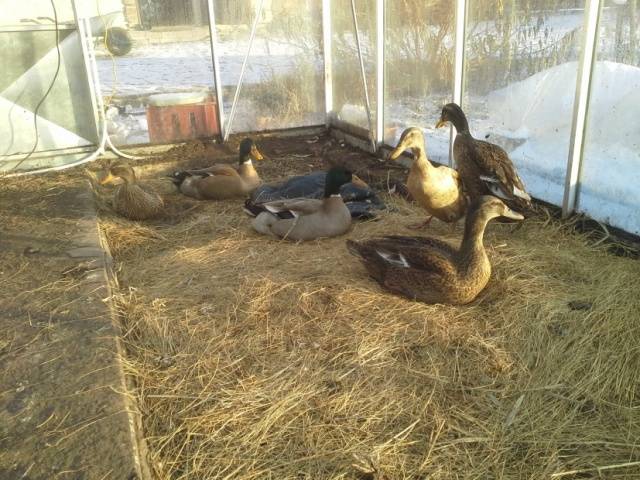 A different situation is possible only if there is a bathhouse in the room. Then the ducks will make a swamp there.

Bunker feeders can be arranged for ducks, but due to the tendency of birds to obesity, only a daily portion of concentrates can be put there.


Bashkir women do not sit on eggs, as advertisements claim, so when ducks begin to lay, their eggs are collected for further laying in incubators. Feeding ducks with forage for laying hens can speed up the laying of ducks, as usually the start of lay depends on the length of daylight hours. The dependence on air temperature is much less. 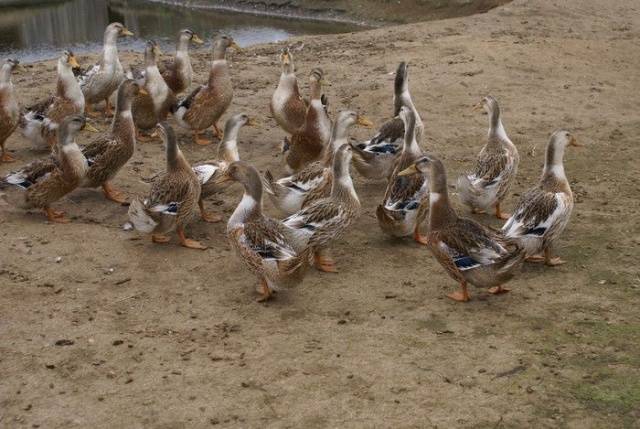 Therefore, in order for the ducks to rush as early as possible, they are transferred to feed for layers. In this case, even without special lighting in the house, the duck will begin to lay in March. True, it may turn out that she will begin to lay eggs right on the snow.

To obtain an incubation egg, 3-4 ducks are identified for each drake. With more eggs, many eggs will remain unfertilized.

The physiology of waterfowl is such that the maximum number of fertilized eggs is obtained when a pair is mated in water. This happens because ducks have a body that is flattened from the back and abdomen for better retention on the water and short legs, long ones, are not needed for rowing. But because of these features, it is not very convenient for them to mate outside the reservoir. 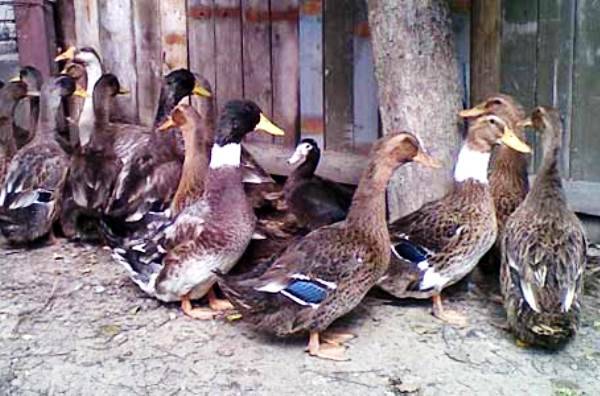 The eggs of the ducks are surprisingly even in size. They can vary in size from different ducks, but the same bird will have eggs of the same size.

It is better not to lay eggs too small in the incubator, and discard the duck that lays them from breeding. The eggs of the Bashkir duck are incubated in the same way as any other.

At the same time, there is such a moment that ducklings are often better hatched under hens. If there are ducks of a different breed that sit well on eggs, future Bashkirs can be planted on them. It should be borne in mind that if a duck has sat down, then, hatching chicks, it practically does not leave the nest. Therefore, it is not recommended to limit future hens in feed. Even when they are obese, they will lose half of their weight when hatching eggs.

Eggs under brood hens can be checked in the same way as during incubation using a handheld tester. At the beginning of incubation, the duck will run away from the nest, while cursing the owner. At the end of the term, the hen sits very tightly on the eggs and will fight when trying to take the egg.

Important! If the duck decides to fight, then the egg taken out from under it must be covered with a hand from above. Otherwise, with a blow from its beak, the brood hen can pierce the eggs, and the embryo will die.

Leaving the nest at the beginning of the brood to feed, the brood duck always tries to cover the eggs. Sometimes she does it just for the sake of form, as in the photo, and sometimes she closes it so that the eggs are not visible under a layer of grass and fluff. 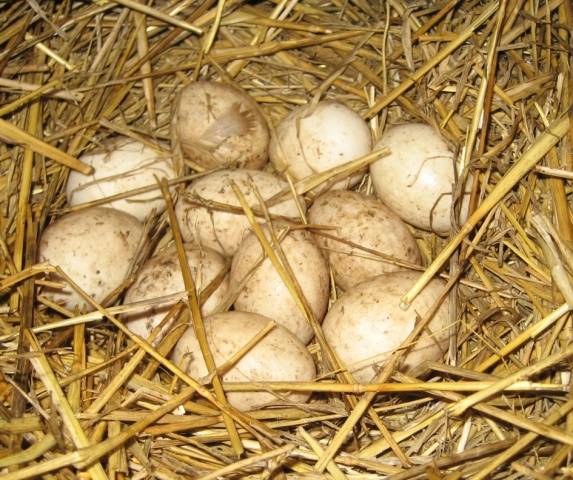 Unfortunately, it is undesirable to put duck eggs under chicken or turkey. Duck eggs require 28 days of incubation, and 21 days are enough for chickens. A hen can abandon a nest with hatching ducklings. A turkey has the same incubation period as a duck, but the shell of duck eggs does not withstand the claws and weight of the turkey.

How many eggs to put under the hen needs to be decided depending on the size of the future "mother".The bird is able to hatch 10-17 of its own eggs. If the eggs are large, and the foster mother is small, they lay about 10 pieces. 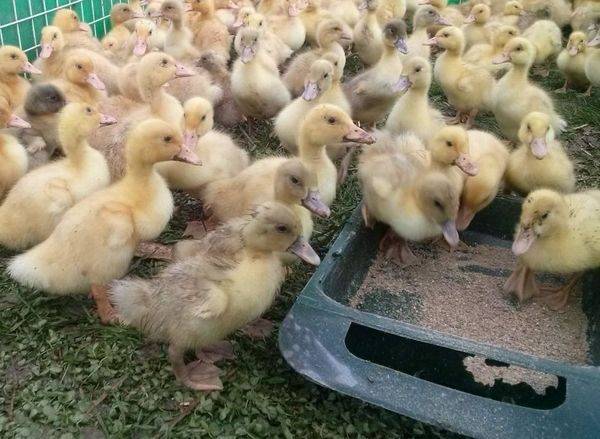 The hatched ducklings are raised in the same way as other young ducks. If it is possible to give them plankton from reservoirs, you can feed them with such food. But it must be fresh. Since these conditions are very difficult to comply with, the ducklings are fed with ordinary starting compound feed.

Reviews of the owners of Bashkir ducks


Olga Vidimirova, from. Bobrovichi
She usually kept gray Ukrainian and white Peking ones, and then a friend brought ducklings, which were sold to her as Ukrainian. But these ducklings have grown up somehow very large. I made inquiries, experts said that these were Bashkir colored ducks. It became interesting to me, I took a couple of drakes for my Ukrainian ones. I chose the color of my ducks, and in the herd, when it became possible to compare, it turned out that the drakes are lighter than my ducks. I left them to leave, in order to pour fresh blood. So, now I have half of the flock colored. Overall, I am satisfied. It is bad that these ducks, even mixed ones, do not incubate eggs. But I still use an incubator, so hatching is not a problem for me.
Pavel Stepanov, from. Tarasovshchina
I bought Bashkir ducklings, but they grew up very small in comparison with the advertisement. At 4 months, they weigh 2.5 kg. I bought it at the Blagovarskaya factory. It seems like a reliable manufacturer, but come on. I began to rummage around and ask on the forums, they said that I was feeding something wrong, or I bought a "small" line of Bashkir at the factory, since to get meat crosses they keep the egg line and meat line clean, but with a lower egg production. When crossed, a fast-growing meat cross is obtained. But at the same time, the factory can sell both a Bashkir and a pure egg line, which is small; and clean meat, which is large. So I, perhaps, got just on the egg.


At the same time, the buyer will never be told which line of the Bashkir duck he takes.

The Bashkir breed, as a meat breed, is superior to the Peking breed when kept in Russian conditions. But it does require a properly formulated diet and care when buying ducklings or hatching eggs.