One of the universal chicken crosses, intended for breeding by small farmers and in private farmsteads, was bred in Hungary and, despite the advertising of sellers, is still little known both in Ukraine and in Russia. However, the cross is very similar to egg Red bros and Lohman Brown... Perhaps chickens are simply confused. 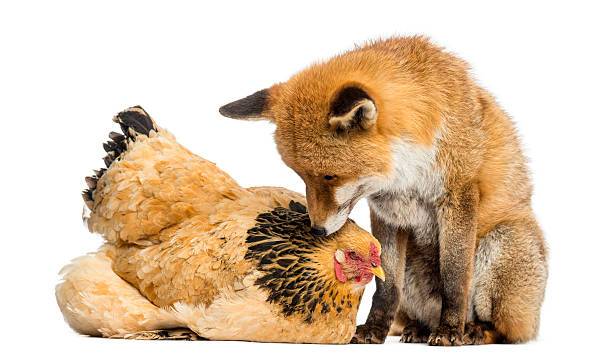 Foxy chickens, whose name literally means "fox-colored chicken" or "fox-chick", got their name not for their friendship with the fox, but for the color of the feather. The actual color of these chickens is auburn, although slightly different from the more common brown egg crosses like the Lohman Brown. The photo shows a cross foxy chick with a small number of feathers of a different color. 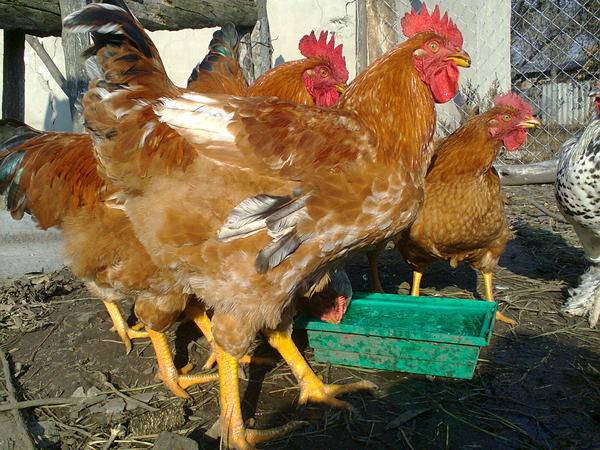 After the introduction of the cross to Ukraine, these chickens received additional names "Hungarian Giant" and "Red Broiler". The same names migrated to Russia. In general, the cross is bred in few places, so you should be very careful when buying chickens of this breed or hatching eggs. For example, it is impossible to say with certainty whether foxy chickens or other "ginger" breed are captured in this photo. 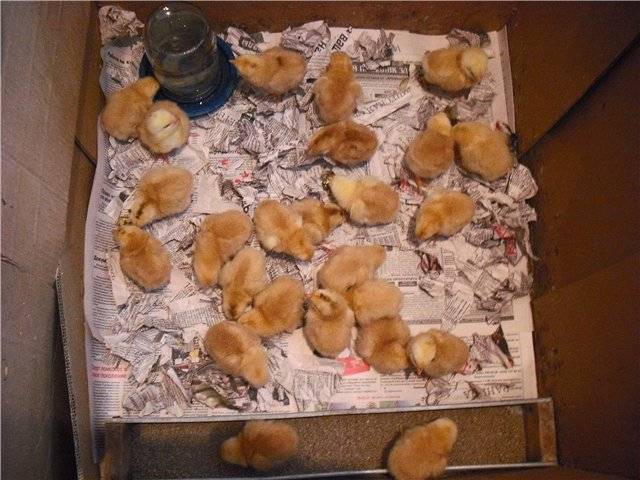 Attempts by private traders to buy any thoroughbred poultry have shown that the sale of chickens is often carried out by resellers, who themselves do not understand well who they are selling. They just don't care.

Therefore, if you want to start a real foxy chick, you need to look for a proven breeding farm, perhaps according to recommendations. It is not worth buying chickens on an ad from private hands, since the foxy chick is a hybrid, the producer traditionally keeps the parent breeds secret, and purebred breeding of this cross by private owners is impossible.

They can sell, at best, a cross with red Orlington roosters or red Rhode Island. Chickens from foxy chickens and these males are very similar to the cross, but in terms of productive characteristics they are inferior to the cross.

Foxy Chick. Pros and cons of this cross

Description and characteristics of the foxy chick breed

Foxy chick - large chickens, gaining up to 4 kg of weight with the right diet. Roosters can grow up to 6 kg. Foxy grows slower than broiler breeds, but growing them pays off in that chickens are suitable for both meat and eggs.

Foxy gains weight very well, although they are inferior to broilers in daily weight gain. At 4 weeks, the average chick weight is 690 g, and at 50 days, the chickens weigh on average 1.7 kg. Egg production in chickens of this breed is 300 eggs per year. The eggs are large, weighing 65 - 70 g. The color of the shell is light brown. 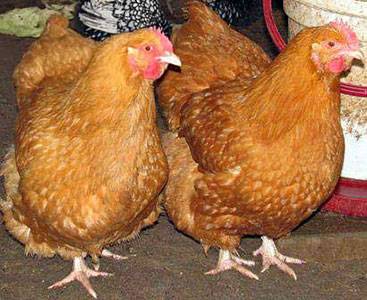 The standard specifies that the foxy is a squat, broad-bodied chicken with a powerful body. The description of the breed is true, but only for adult birds. Chickens first grow in length and only then their body begins to be heard. Moreover, the young are so different from the description that the owners take it for some other breed.

The breed was bred specifically for private owners and local farmers, so the question of what to feed the foxy is usually not worth it. Unlike broiler and egg crosses, which require specialized feeds to obtain the result declared by the seller, foxy feeds are quite sufficient for the same feeds as for ordinary domestic layers.

And just like other chickens for private farms, foxy needs greenery.

A serious advantage of the cross foxy chick is the 100 percent survival rate of hatched chicks. Of course, if you don't put a bucket of water right on top of them.This foxy compares favorably with other breeds of chickens and chicken crosses. Especially from broilers, which have a high mortality rate among chickens.

Important! A huge disadvantage of foxy chickens is that they do not get along with other chickens and they need a separate space for keeping.

Foxy is a rather absurd bird, even starting fights with each other. When keeping a cross at home, you cannot leave more than one rooster in a flock. Even chickens are very pugnacious. When kept with other breeds of foxy chickens, they simply slaughter "outsiders", taking advantage of the size and weight advantage.

Cross is undemanding to the conditions of detention, but poorly adapted to the Russian cold. Of course, like all land birds, he does not like dampness and rain, therefore, for winter nights and inclement weather in autumn and spring, he needs a shelter in the form of a barn. Chickens are afraid of drafts, so the barn should be free of cracks.

With a crowded keeping of chickens indoors, they may have chewing lice. As a prophylaxis for infection with this parasite, chickens need to put a box of sand or ash. Moreover, the ash in this case will be better.

The winter bedding should be deep enough for the birds to "equip" themselves with a depression in which it will be warmer than in the barn. It is not necessary to insulate the barn if the temperature is not too low in winter. But, if possible, it is better to insulate the room. 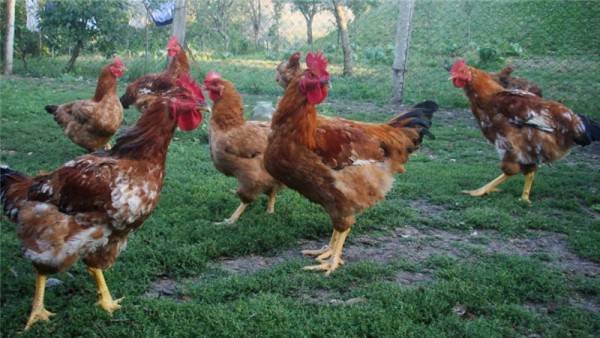 Roosts are also necessary for this breed, since, despite their considerable weight, the Hungarian giants fly well. This, by the way, must be taken into account when arranging open-air cages for walking. It is better to make perches at a height of 40 - 80 cm.

The very concept of "cross" already excludes the possibility of breeding, since in the second generation splitting into the original breeds will take place. Moreover, since the inheritance of genes of highly organized organisms is complex, the offspring will have an arbitrary mixture of the characteristics of the parental breeds. As a result, the second generation hybrids will be significantly inferior in their productive characteristics to the foxy cross.

Incubation and hatching of chickens is not about the hens of any of the specially bred crosses. To obtain eggs, birds need to equip nest boxes, and chickens will have to be hatched in an incubator.

You can find claims that foxy is a good brood hen. To understand that in these chickens the brooding instinct is completely absent or poorly developed, it is enough to check the productive characteristics. No hen that lays more than 200 eggs a year is a good brood hen. She does not have time for this, since she must have time to lay eggs and shed.

Attention! Moulting in birds occurs after the end of the breeding period.

Thus, a hen lays 20-30 eggs, incubates them for 21 days, then begins to lay and incubate again, making 3 - 4 clutches per season, and “leaves” to molt, laying as a result no more than 150 eggs per year. The second option: the hen lays 300 eggs per year, leaving 2 months to moult. But in this case, she does not incubate. 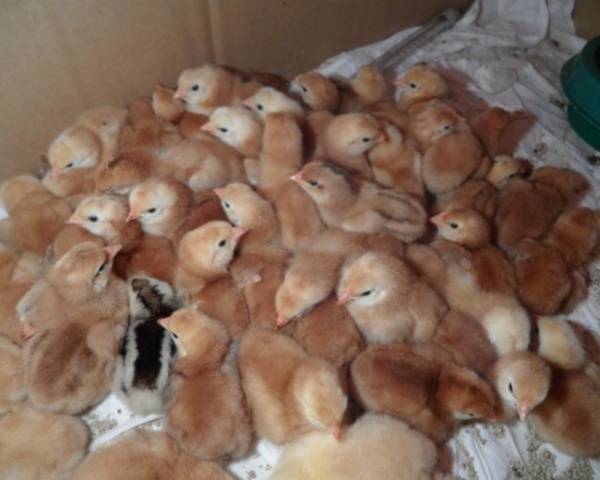 You can try to breed foxy with the help of an incubator if you plant a rooster not with a same breed, but with an Orlington or a genus Island. In the first case, the offspring will retain the size, in the second, egg production.

An adult bird is fed in the same way as chickens of other breeds. Young animals usually begin to feed with starter compound feed for broilers. Free access to fresh water is required, as dry compound feed can get stuck in the esophagus.

Important! In no case should fresh milk be given, which will cause diarrhea in chickens. Only fermented milk products. 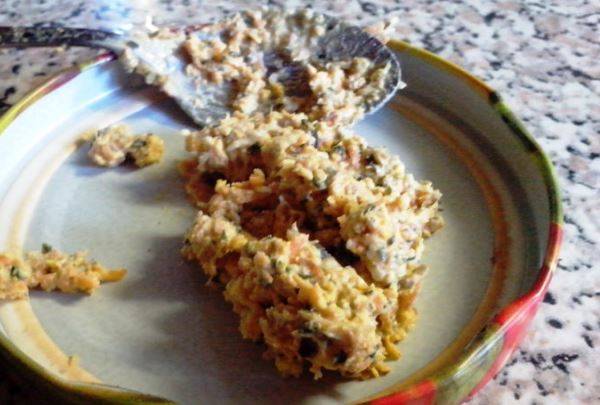 But it must be borne in mind that all such homemade feeds quickly deteriorate.In addition, they are made by eye and it is impossible to determine the content of trace elements and vitamins in such feed.

In contrast to homemade food, industrial food is made according to instructions and there are fewer surprises with them.

Reviews of rare owners of the Hungarian giant

Cross-foxy chic is not widespread in Russia and slightly more in Ukraine. However, there are those who have acquired these chickens.

Andrey Symonenko, from. Mirolyubovka
I took foxy chicks from an incubator that sells chickens to the public. I don’t know where they get the egg from, buy it in Hungary or somehow breed it themselves, but the grown chickens matched the descriptions. True, the roosters turned out to be too large and hurt the chickens, trying to trample them. Therefore, we quickly removed with a rooster. They were not going to breed chickens either. In the summer, the roosters were removed, in the winter, when the egg production decreased, the chickens were slaughtered. We live not far from the incubator and than feeding non-laying chickens in winter, it is easier to slaughter them and buy new chickens in spring.
Dmitry Orekhov, from. Lower Katukhovka
I would like to say: "Citizens, beware of counterfeits!" We tried to take Cross Foxy Chicks twice. The first time was led to "cheap chickens" from the hands. Something reddish has grown. Until now, we cannot understand what breed it was and whether it was breed at all. The second time they did not make such a mistake and took them from an industrial incubator. I liked real foxy chicks very much. They really turned out to be very tenacious. All have grown. On the advice on the forum, they tried to cross them and Rod Island... Crossbred chickens hatched, but still too small to say anything definite. In the incubator, we were told that such meat and egg crosses, like foxy chicks, will soon replace regular broilers. I don’t know at this point. Foxy grows slower than broilers. True, they eat less in a day.

Cross foxy chick is a type of hybrid that is very convenient for keeping on a private backyard. But due to the growing popularity and the small number of real Hungarian giants, it is easy to buy chicken of unknown origin, so you shouldn't buy this cross from private advertisements on websites.