Welzumer is a breed of chickens bred in the Netherlands around the same years as Barnevelder, in the years 1900-1913 of the last century. The breeding of the breed was mainly attended by partridge chickens: Cochinchins, Wyandot, Leghorns and Barnevelders. They also poured in red Rhode Island.

The task of the breeders was to obtain chickens that lay large eggs with colored shells. And this goal was achieved. The new breed was named after the small village of Velzum in the Eastern Netherlands.

In the late 1920s, these birds entered the UK and were added to the British Standard in 1930. 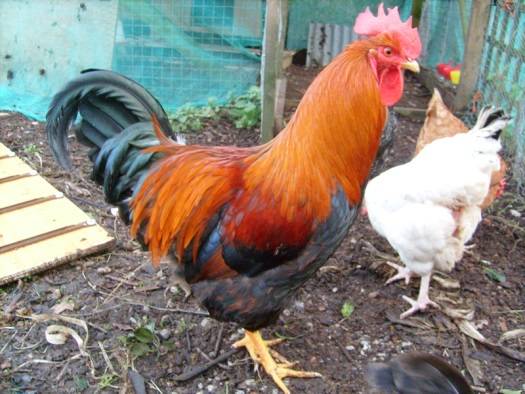 The Beelzumers were especially prized for their large, beautifully colored eggs. They were bred as a productive meat and egg breed and have remained so to this day. And today, judges and experts at exhibitions first of all pay attention to the productivity of the chicken and only then to the appearance and color. Later, the dwarf form of Welzumer was bred. 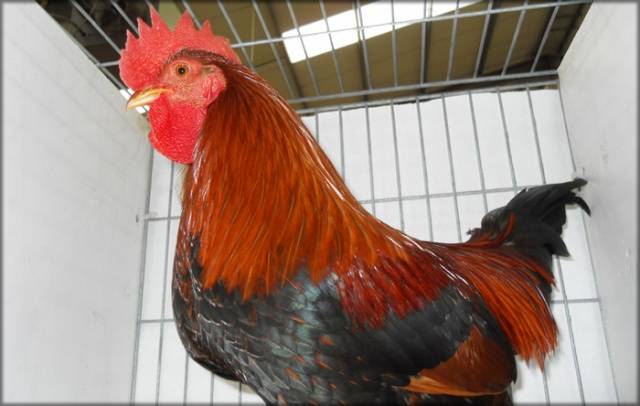 The appearance of the representatives of the Welsumer breed fully corresponds to the ideas of many people about how a laying hen should look like in a village. This bird is modestly colored in brown tones. Only experts will be able to figure out how the silver color differs from the golden one and they are both from the red partridge. The rooster is colored brighter. The main color of the rooster's feather is brick. But as a meat and egg breed, the Velzumer is larger than specialized layers. An adult chicken weighs 2-2.5 kg. Rooster - 3-3.5 kg. In the dwarf version, the rooster weighs 960 g, the laying hen 850 g. 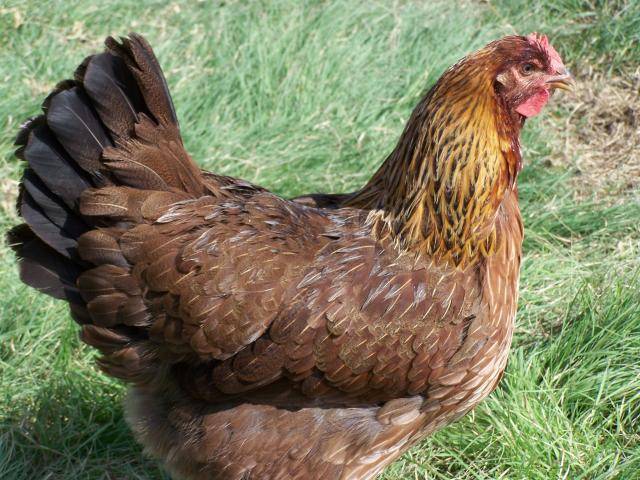 In the Netherlands, the Welsumer standard is quite strict with separate article descriptions for layers and males. The color in this case is provided for only red partridge.

The general impression of chickens is light, mobile birds. In terms of light, impressions are deceiving. This is a medium-weight breed. The impression of a light body appears due to the rather "sporty" figure on long legs. The densely lying plumage also visually reduces the volume compared to the loose feather in some other breeds.

The head is medium in size with a large, erect, leaf-shaped red ridge. Earrings are long, oval, red. The lobes and face are red. The beak is of medium length, dark yellow. The eyes are orange-red.

On a note! Eye color may vary by color.

In birds of golden and silver colors, the eyes may be orange.

The neck is of medium length with satisfactory development of the mane. The body is seated horizontally. The silhouette of the body is an elongated oval.

The back is long, moderately broad. The loin is well feathered. The tail is set at an angle from the vertical, medium splendor. Black braids of medium length.

The chest is broad, muscular, and convex. The shoulders are powerful. The wings are tightly pressed against the body.

The legs are of medium length, well muscled. Metatarsus yellow or white-pink, of medium length. The majority of the livestock have unfeathered metatarsals, but sometimes the legacy of the Cochinchins can come across: individual tufts of feathers on the metatarsus. 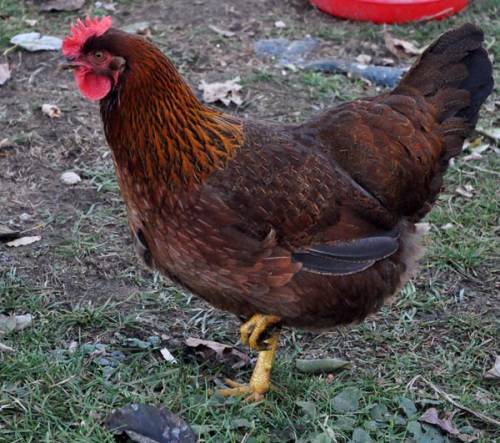 The main breed characteristics are the same as in roosters. The scallop is small, regular in shape. The body is large and wide, horizontal. The back is wide and long. The belly is well developed and full. The tail is at an obtuse angle in relation to the body.

But with color, there can be different situations, since in American standards three descriptions of the color of the Velzumer breed chickens are given at once.

Interesting! Of the three color options in the homeland of the Welsumer breed in the Netherlands, only red partridge is recognized.

The most common color is red partridge. 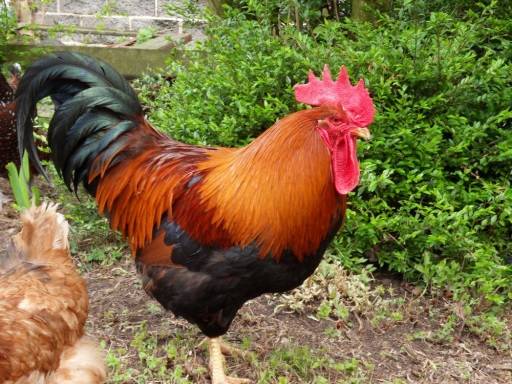 The rooster has a reddish-brown head and mane on the neck. On the chest is a black feather. Shoulders and back with a dark reddish brown feather. Flight feathers of the first order are dark brown, the second - black with brown specks at the ends. The long feather on the lower back is the same color as the lancets on the mane. Down is gray-black. Tail feathers are black with a green tint. 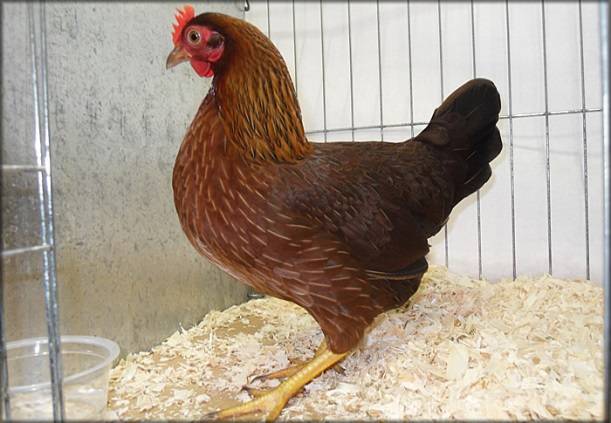 In American descriptions of Velzumer chickens, this color is called Silver Duckwing. Like golden, it is most common among dwarf chickens of the Velzumer breed, although it is also found in a large form. 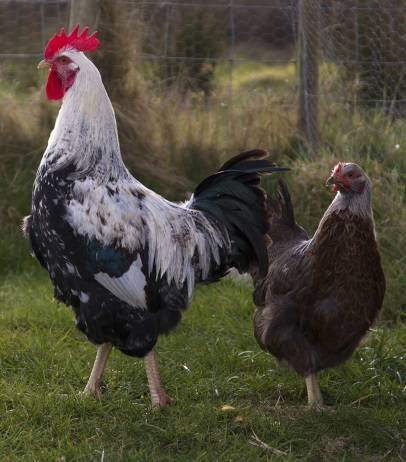 In roosters of this color, the brown color is completely absent in the plumage. A white feather took its place.

In layers, red feathers are replaced by white only on the neck, but the color of the rest of the body is much paler than that of red. This difference is clearly visible in the photo of silvery Welsomer breed chickens. 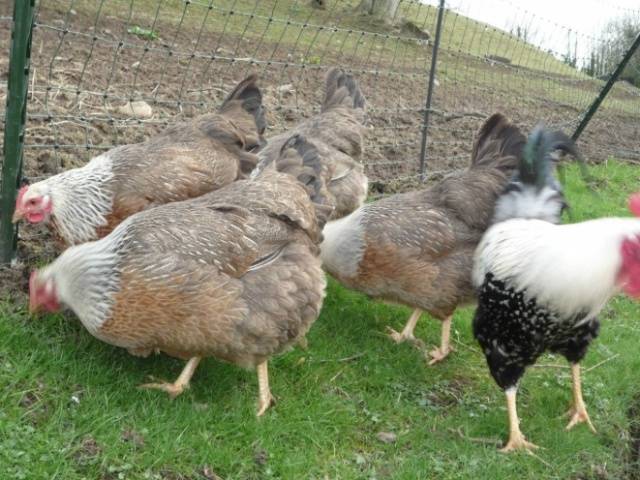 A hen of this color is sometimes difficult to distinguish from a layer with a red color. The feather on the neck can be lighter and more "golden" in color than the red ones. The body is slightly lighter, but in general the two colors are very similar in layers. As evidenced by the photo of the breed of chickens Velzumer with a golden color. 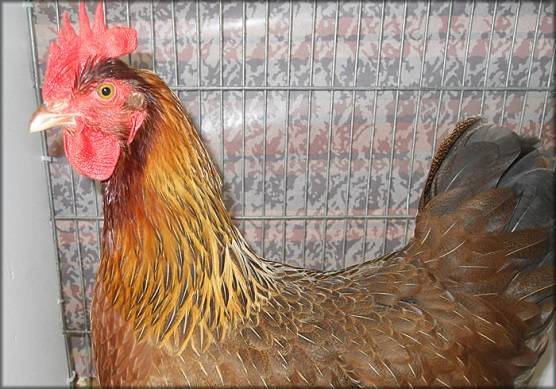 It is not difficult to distinguish a rooster. Instead of a reddish-brown mane, the Golden Duckwing has golden feathers like this Velzomer rooster. The same is true for the back and lower back. Those feathers on the body and shoulders, which should be dark brown in red, are light brown in golden. Flight feathers of the first order are very light, almost white. 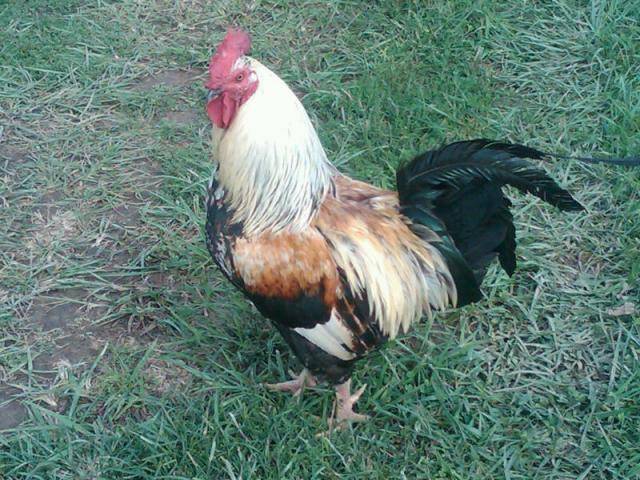 According to the reviews of the American owners of Velzumer chickens, at their exhibitions, the judges pay attention not so much to the color as to the products and in the American version of the Welsumer the types of colors can be mixed.

The productivity of the large form of Velzumer is 160 eggs per year. Weight ranges from 60-70 g. "Productivity" of the dwarf version is 180 pcs. per year with an average weight of 47g.

This is the only information on which there is no discrepancy. The Welzumer egg was appreciated not only for its size, but also for its color. On foreign and advertising Russian sites, descriptions and photos of the eggs of Velzumer chickens show products of a beautiful dark brown color with darker spots on the shell. The color of the eggs is so intense that when you remove the still wet egg, you can wipe off some of the paint. 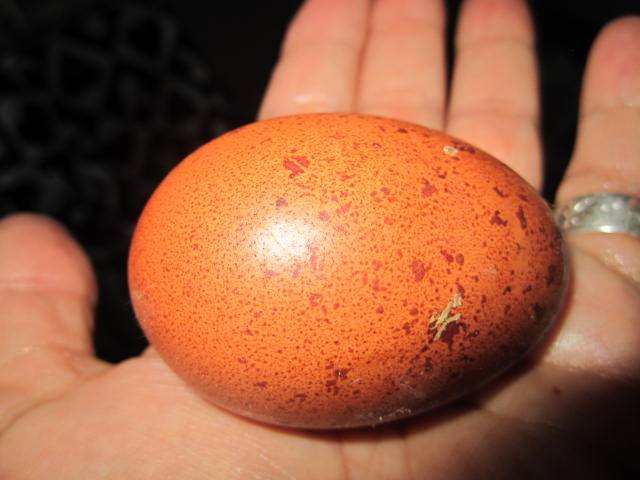 In addition, American breeders claim that the spots on the eggs are analogous to fingerprints, but for the laying hen. A specific hen lays eggs with a strictly defined pattern of spots that does not change during the life of the bird. This moment can facilitate selection, as it makes it possible to select eggs from specific birds for incubation. 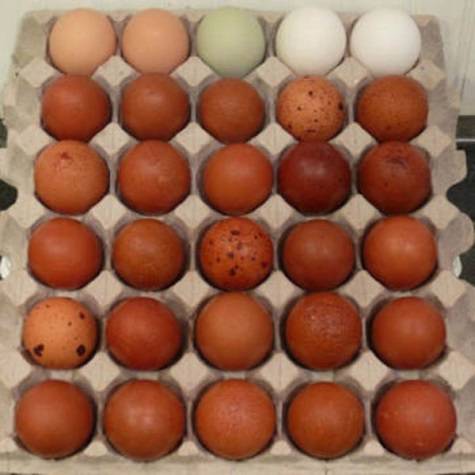 In the photo in the top row there are white eggs from Leghorn, in the middle from Araucan and to the left of the Delaware chickens.

The dwarf version of the Velzumer breed of chickens bears eggs of a less intense color.

Warning! The color intensity decreases towards the end of the cycle. 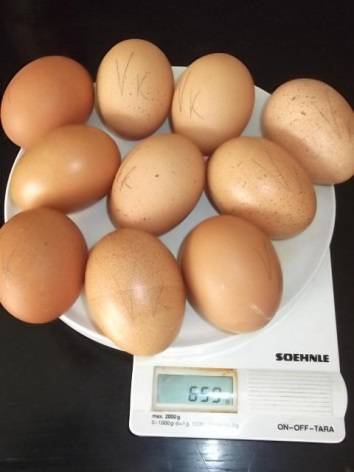 The weight of the Slovak Welsummer eggs corresponds to the declared, but the color is not brown, but beige. Although the spots are still visible.

The weight of the eggs of the dwarf breed of Welsumer chickens is even slightly more than described, but the color is also far from brown.

According to the owner of these chickens, the point here is that European judges at exhibitions pay attention to the color and exterior of the chickens, and not to the products they produce. But from the reviews of the Russian owners, it follows that the "Russian" Velzumers lay eggs less than 60 g in weight. But the color is in line with the standard. The eggs for incubation were purchased from the Gene Pool. But there is an assumption that the discarded egg was sold to a private person.

Welzumer is an autosex breed. A cockerel from a chicken is easy to distinguish by color. The photo shows chickens of the Velzumer chicken breed. 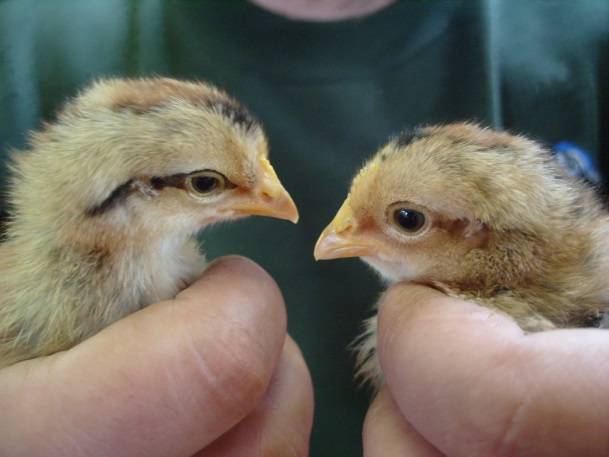 On the left is the chicken, on the right is the cockerel. In the description it is indicated, and this can be seen in the photo, that the female Velzumer chickens have a dark eyeliner. In cockerels, this strip is lighter and more blurred. 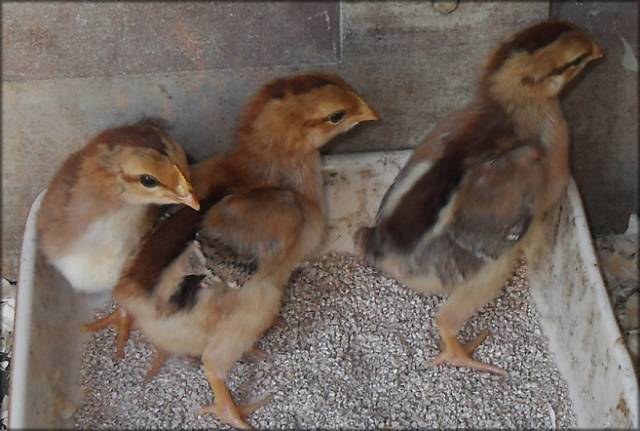 Females also have a darker color of the V-shaped spot on the head and stripes on the back. When comparing heterosexual chickens, as in the photo, this is clearly visible. But if there is only one chicken, you need to focus on the "eyeliner".

In the video, the owner of Velzumerov clearly shows the difference between a chicken and a cockerel. The video is in a foreign language, but the picture shows that he shows the chicken first.

Beelzumers are very calm, but at the same time curious birds. They are easy to tame and love to participate in all the adventures they can find in the courtyard. They recognize people well and stick to the owners in an attempt to beg for an extra piece.

Tatiana Toropova, Lipetsk
We bought hatching eggs of this breed from the Gene Pool. The color was as described. Weight was not checked. The chicks hatched normally. We noticed that, in addition to color, males fledge slower than females. I don’t know whether it’s because they were constantly fiddling with the chickens, or it’s really a breed trait, but the chickens are very calm and tame. The eggs are relatively few, but really large.
Evgeny Ustinov, from. Kichkiri
The truth about them is said that they look like simple mongrel laying hens. True, it is much larger than a mongrel. But our eggs are large, although not as brown as in the photographs. I don't know if they are missing something or if the breed has just deteriorated.

Initially, the Velzumer is a quality, unpretentious and productive breed, very well suited for keeping in private estates. But either because of inbreeding, or because of mixing with other similar breeds, or because of the bias in the show line, today it is difficult to find a thoroughbred representative who has retained all the original productive qualities. But if it was possible to find such a bird, then in the end the chicken-fighter stops at this breed.