In 2005, in one of the villages of Borki, located not far from Kharkov, breeders of the Poultry Institute of Ukraine bred a new egg breed of chickens. Borkovskaya Barvy breed of chickens in terms of egg production slightly falls short of industrial crosses, but it carries large eggs and allows poultry farmers to breed these birds in themselves. Scientists are positioning these chickens as a breed, not a cross. But some chicken breeders cross Borkowski chickens with Rhode Islands to get a meat hybrid.

What kind of breed 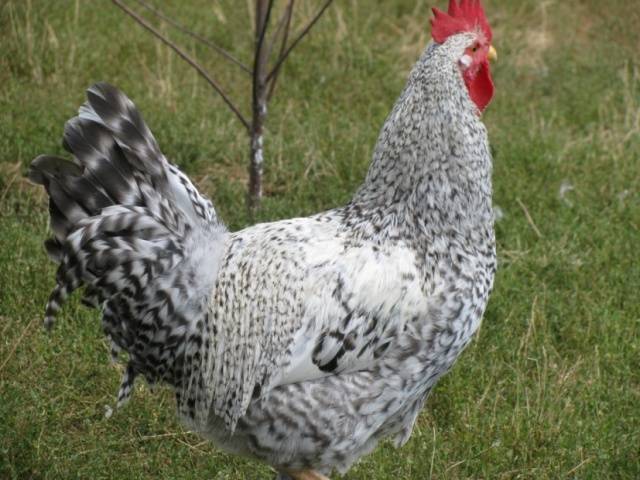 While this is a rather rare and little-known breed, but, according to the lucky ones, the Borkovsky Barvy chickens have a high survival rate and good egg production. They were bred by complex crosses of colored and white Leghorns, therefore, high egg production is not surprising. But information about the peaceful nature of this breed varies greatly. Some owners confirm such data, others say that roosters are very pugnacious. Up to killing an opponent and attacking the owner. Here the problem may lie in the fact that this breed is very young and the selection for goodwill has not yet been completed. Aggressive roosters are quickly sent to the soup, so pugnaciousness will clearly be eliminated soon. 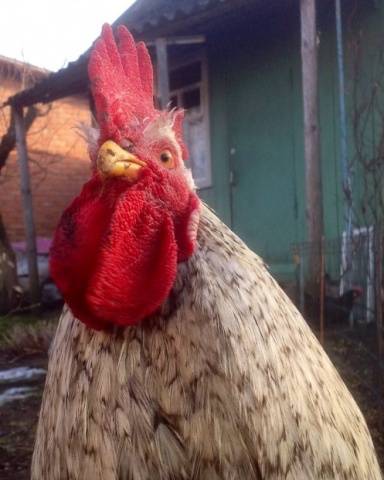 Chickens are really very calm. They trust the owner, not trying to run away from them.

On a note! Borkovskaya breed of chickens is an incorrect name for this egg chicken.

Borki also bred egg and meat Poltava clay and meat and egg Hercules. In Borki themselves, this chicken is indicated as the Borkovsky colored breed of chickens. From one of the variants of the Ukrainian name of the paint - "barva". Given the origin of the breed from Leghorns, the Borkovskaya station can also classify the Borkowski Barvy chickens as silvery Leghorns. 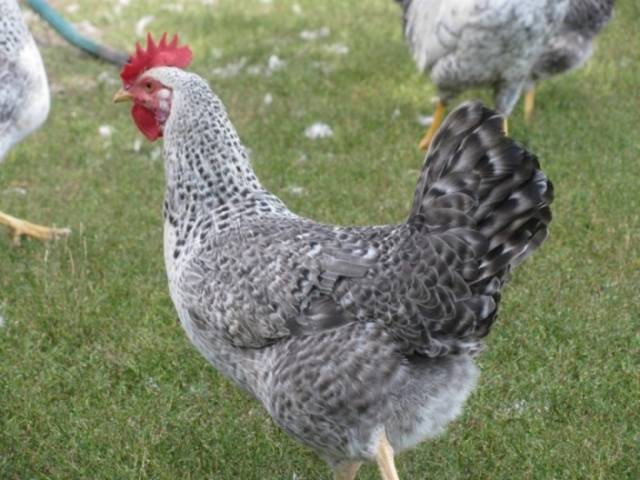 General appearance: a medium-sized chicken with a light bone. Rooster weight does not exceed 2.7 kg, chicken - 2.1 kg. The head is medium-sized, with a yellow beak. The eyes are orange. The crest is bright red, leaf-shaped. The crest has 6-8 long, well-defined teeth. The crest is large even in chickens, but the teeth on them are much shorter than in roosters.

The neck is long and thin. The body is thin-boned, elongated; the back and loin are straight. The tail is long, fluffy, set high, but not vertical. The braids on the rooster's tails are long. Roosters have dark rings on their tail feathers. The roosters' breasts are well muscled and protrude forward. The belly is tucked up. In chickens, the belly is well developed, full.

The wings are small, tightly pressed to the body. Against the colorful background, the border between the body and the wing is invisible. Legs are of medium length. Metatarsus are unfeathered, yellow.

On a note! The skin of the Barvy breed of chickens is also yellowish.

They try to breed a cuckoo color, which makes it possible to distinguish a cockerel from a chicken by still chickens. Chickens are often darker. But the color lightens down and the belly of Borkowski chickens can be white. 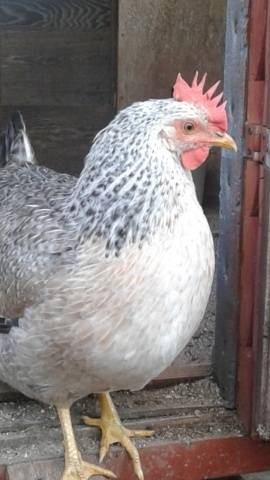 A white belly is not a prerequisite for belonging to the Borkovsky barvy. It is always lighter on the back, but it can also be light red. In the photo below, a laying hen of the Borkovsky barvy breed of chickens in the company with a rooster. 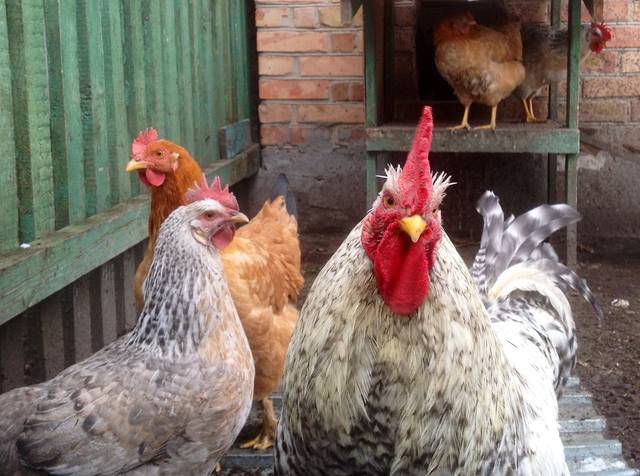 On a note! In addition to the cuckoo, the Barkovskys barvy are still present in white, red and red colors.

The presence of a solid collar on the neck testifies to the uncleanness of Barvysty. Roosters are rejected from breeding in the case of small combs and earrings. Such a feature automatically sends a rooster of an egg-bearing breed to fattening before slaughter.These signs indicate that the male will not be able to fertilize the hens well.

In the description of the Barkovsky barvy chickens, it is argued that the birds are light in weight, but they have tasty and tender meat. By the age of 2 months, the young are gaining weight of 1.1-1.2 kg. Pullets begin to rush at the age of 4 months. The egg production of these hens is 255-265 eggs per year of laying. Egg production peaks in the 29th week of life. At the age of 7 months, pullets lay eggs weighing 52-53 g, at the age of 58-59 g.

Reviews of the owners of the Borkovskaya barvy breed of chickens are at odds with the station data. The owners claim that these chickens lay eggs weighing 65 g and larger. At the beginning of lay, the weight may be 57-59 g. 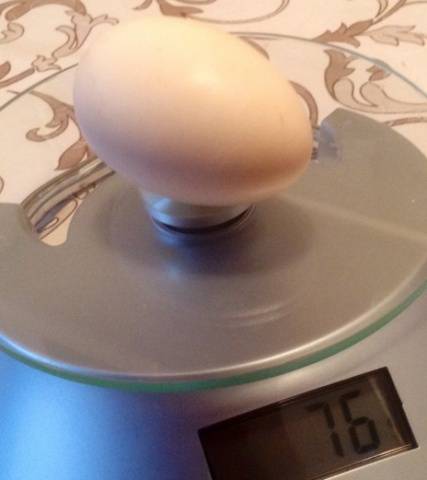 Eggs are light cream or light brown in color and have a taste similar to homemade ones. The egg characteristic of Borkovsky chickens is so good that private traders replace their livestock with Borkovsky colored chickens.

Important! This breed "lasts" longer than usual egg ones, but after 2 years the productivity of Borkovsky barvy begins to fall.

Advantages and disadvantages of the breed

From the description of the Borkovskaya barvy breed of chickens on the site of the breeding station, it follows that there are two very serious advantages of this breed: autosexuality and high hatching and survival of chickens. 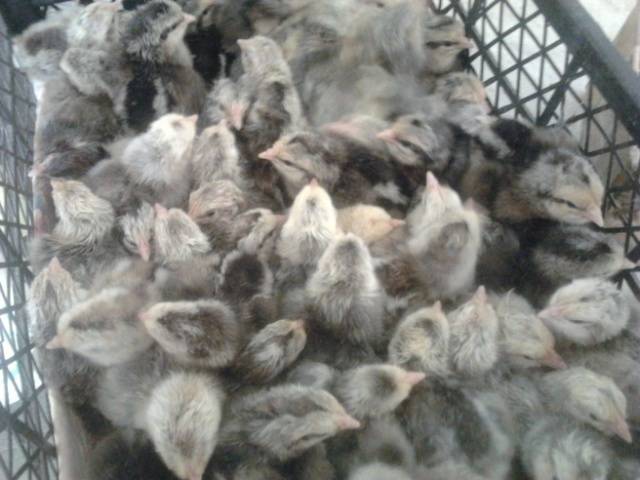 In chickens of the Borkovskaya barvy breed of chickens, you can see white spots in the photo. But the light fluff in cockerels and dark fluff in chickens can be seen well.

On a note! Unsorted chickens of egg breeds are often sold at Borkovskaya station.

But in this case, this is a photograph of a private owner who has no reason to deceive anyone. Chicks only from the incubator.

And older chickens, in which the sex is also clearly distinguishable. The chicken is dark, the cockerel is light. 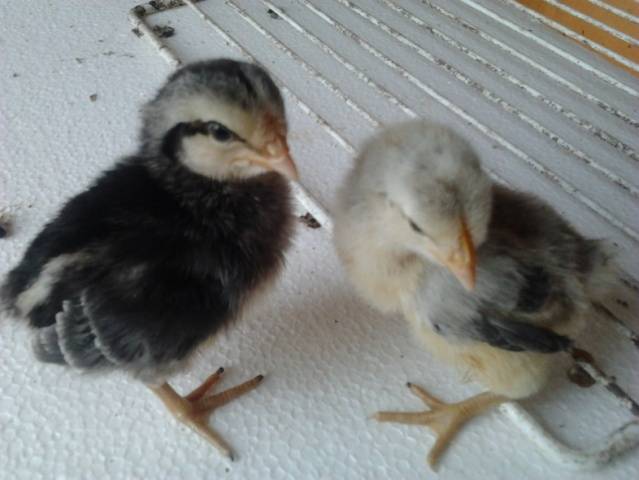 Breeding chicks in an incubator allows you to get 92% of the total number of chicks set. Of the young, 94-95% survive up to 2 months. The safety of an adult bird is 93-95%. From the point of view of small private business, the breed turned out to be very profitable.

All from the same description of the Barvy breed of chickens from the selection station, it follows that in addition to good breeding characteristics, birds have good adaptability to various conditions of keeping and frost resistance. Chickens have a well-developed maternal instinct.

These birds do not require special conditions for keeping. But even from the description of the Borkovskaya breed of chickens, it is clear that this bird loves to fly. With this fact, you either have to come to terms and pre-lay the "shrinkage-shrinkage" in the calculation for the chickens lost or caught by someone, or it will be necessary to build an open-air cage closed on top for walking.

But in the hen house you can save space by arranging perches not only at a height of 0.7-0.8 m, but also much higher. In the case of Barvysty, perches can be made in several tiers. These chickens, flying down from a high perch, will not harm themselves. 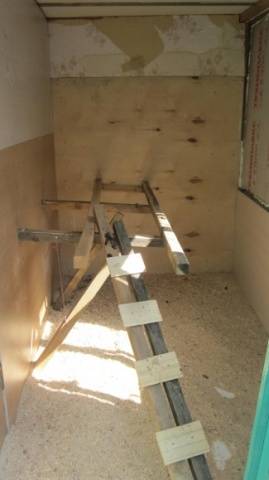 For the winter, it is necessary to insulate the chicken coop only if there are severe frosts in the region. However, now it is already impossible to say for sure where the frosts will be severe and where not. The main requirement is the absence of drafts. Otherwise, the content does not differ from other chicken breeds.

It's good if there is deep bedding... Also in the chicken coop you need to put trays with ash and sand for bathing chickens.

Feeding Barvysty also does not differ from other breeds. They also need grains, legumes, herbs, vegetables, mineral supplements, and vitamins.It has been noticed that Barvysty are prone to obesity when there is a large percentage of corn in the feed.

Chickens love to scatter food with their feet. A small chicken manages to do this even in a feeder, beloved by many chicken breeders, made of a large-diameter plastic pipe. Therefore, it is better to install a feeder in the chicken coop, into which the chickens can stick their heads, but will not pass completely. 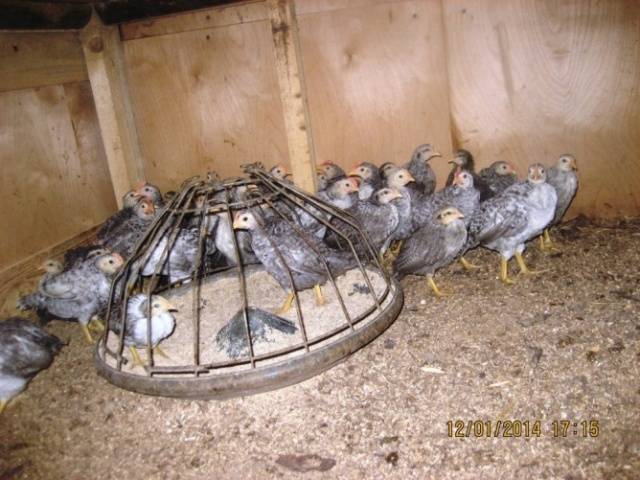 This is a good option for already adult layers, but for such small chickens as young barbies, a separate feeder is needed, made to their size.

Karina Vodina, smt. Koktebel
I confirm about frost resistance. I have one Barvystaya. Very much independent. One evening in the winter I did not return to the chicken coop from a walk. And then there was frost. Although small, only -3, but not a plus. In the morning I was awakened by chicken screams. It turns out that the gulena has returned and demands that she be allowed into the closed chicken coop. The winter overnight stay in the open air did not affect her in any way. By the way, she's the only one of Barvysty who lays eggs for 80 g. Yes, I weighed. The rest are more modest, only 65-70 g. At the same time, they eat much less than the Redbroughs and Rhode Islands that I had before. These ate as if not into themselves.
Vladislav Dokin, from. Morozovka
When I decided to replace my outbred laying hens with a thoroughbred bird and was looking for the right breed, at first I did not even understand how to distinguish Borovsky barvy chickens from the same ones from the photo and description Master Gray or Hercules. Except for weight. In addition, some have argued that birds of this color are blue leghorn. So I went to Borki for insurance. I bought a dozen cockerels and 30 chickens there. When the chickens grew up and began to lay, I came to the conclusion that I did not need a better breed. Moreover, these chickens can be bred independently. They lay very well and the eggs are very large. And that their weight is small, so in a good laying hen it should not be large.