Bees make honeycombs from wax. These structures perform various functions in the hive, each of which is necessary for the normal life of insects. In shape, they resemble hexagons, the dimensions of which depend on the size of the individuals living in them.

What functions do the honeycomb perform?

In the life of a bee colony, combs perform a number of important functions. As a rule, they are used for the following purposes:

All of these functions play a significant role in the life of insects. In beekeeping, families are provided with a building, which they later equip. In the wild, individuals do not have such an opportunity, as a result of which all the time is spent on construction, which does not allow the production of honey in full.

Honey is stored in the upper cells, at the bottom of the hive is much freer - there is collected pollen and flower nectar, enriched with special bee acids and enzymes.

Attention! When honey is ripe on the lower tiers, it is transferred to the upper honeycomb.

Since ancient times, honeycombs made by insects have been considered the standard of architectural construction. This is due to the fact that in a small area, individuals can erect structures that are as strong, functional and effective as possible. For construction, only wax is used, which in a softened state is able to take any geometric shape, including a hexagon - this is exactly the shape that insects give to cells. The honeycombs that bees make have certain characteristics and purposes, therefore they differ in a number of signs.

Varieties depending on the purpose

The honeycomb erected in the wax beehive is different in purpose. Considered by type, the following types are distinguished: 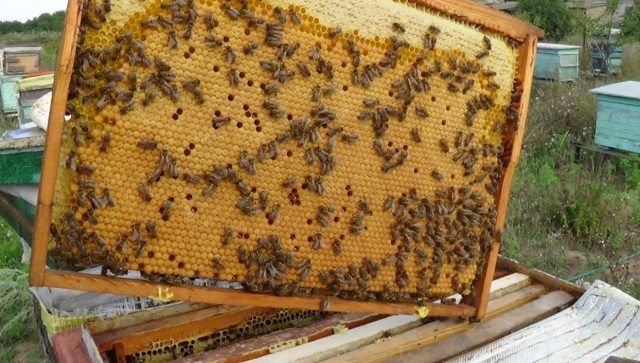 The honeycomb wax plays a huge role. This material is used for the construction of cells of various configurations and purposes.

The honeycomb has the following dimensions:

At the top of the frame, the cells are much thicker than at the bottom. Sizes largely depend on how large the beekeeper provided the hive and what size the individuals themselves are. As a rule, the standard size of the frame for the hive is 43.5 * 30 cm.

Recently rebuilt empty honeycombs are white. The cells that insects use to live begin to darken over time. Gradually, the shade becomes light brown, after which it darkens even more. This is due to the fact that in the process of living in the cells, waste products accumulate.

Attention! In the process of construction, the organs for the release of wax from worker bees are involved.

Where do bees get their honeycomb wax?

Bee colonies not only collect honey, but also equip their hive. The bees use wax for their own honeycomb. If you examine the individual in detail, you can see that there are 4 pairs of glands on the abdomen, thanks to which the release of the product necessary for construction is carried out.

The surface of these glands is smooth, thin waxy stripes are formed on it. It is worth noting that 100 of these wax plates weigh about 25 mg, so for 1 kg of wax it is necessary for the bees to produce 4 million of these plates.

To remove wax strips from the abdominal region, individuals use special tweezers located on the front limbs. After they are removed, they begin to soften the wax with the jaws. After the wax has softened, cells are built from it. For the construction of each cell, about 130 wax plates are spent.

How bees make honeycombs from wax

In early spring, after the bees have gained enough strength after wintering, the insects begin the construction process. It is during this period that special glands begin to function, responding to the production of a sufficient amount of wax.

Only wax is used for the construction, due to the fact that this building material has a number of properties:

The first step is to erect the bottom and only after that they proceed to the construction of the walls. They begin to erect the honeycomb from the very top, slowly moving towards the bottom. The size of the cells depends entirely on what type of bee lives in the hive.

The productivity of insects is limited, every 2 hours the bees produce wax in a certain amount. The individual with its front paws brings wax scales to the upper jaw, which, upon contact with a special substance produced by the bee, begins to be processed. Thus, the wax is crushed and softened, after which it can be used for construction.

Attention! When carrying out the construction of honeycombs, bees need an increased amount of oxygen, therefore it is necessary to provide additional artificial ventilation of the hives.

The optimum temperature regime for the construction of honeycombs is + 35 ° С. While maintaining the set temperature, the wax is pressed into any shape.

New honeycombs of wax are erected over the old ones, after which the bees collect honey in them and seal them. Insects do this work annually. 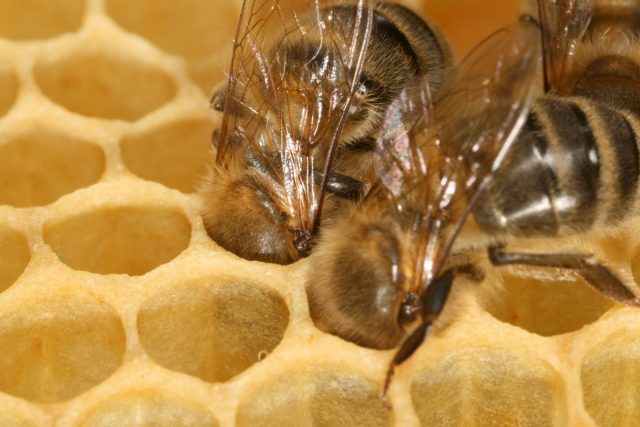 Than the bees seal the honeycomb

After the construction work has come to an end, the insects start collecting honey, which is placed in cells. Throughout the season, individuals work tirelessly to fully provide themselves with food for the winter. The most crucial moment is the process of sealing the cells where honey is located.

As a rule, the combs are filled with honey by a quarter, the rest of the space is set aside for raising offspring. Before proceeding with the clogging of the cells, it is necessary that the humidity level in the hive decreases to 20%. For this, bees create artificial ventilation - they begin to actively flap their wings.

For sealing, a beading is used - a substance consisting of pollen, wax, propolis and bee bread. In addition, it contains many vitamins, micro- and macroelements, essential oils.

What wild bees make honeycombs from

Wild individuals differ from domestic ones in that they do not live in specially prepared hives, but in nests. As a rule, in the wild, insects live in tree hollows or cracks. The main building materials are leaves, twigs and grass.

In the nests of wild insects there are hexagonal honeycombs. For construction, they use a waxy liquid that they release on their own. Before the onset of winter, they begin to cover up all the holes with propolis. For wintering, use the lower part of the nest, where there are no combs and is warmest. At the center of the family is the queen of the hive. Insects are constantly moving, thereby they not only warm themselves, but also prevent the uterus from freezing.

Bees make honeycombs in the form of regular hexagonal cells. Honeycombs are used not only for collecting and storing honey, but also for raising offspring, personal living. In the hives there are several types of honeycomb, each of which performs a specific function and bee colonies cannot do without them. The construction process for wild and domestic bees is identical. Domestic insects collect much more honey than their wild counterparts due to the fact that beekeepers provide them with ready-made hives, and in natural conditions, families have to look for and equip a place for wintering on their own.

Recommended entries
Reviews about Granovsky's honey extractor
Bee zabrus: what is it
Beeswax: benefits and harms
Propolis tincture with milk: medicinal properties and contraindications
Can you eat honeycomb wax?
Bipin T: instructions for use
Flowers honey plants for bees
How many bees are in the hive
Why a bee sting is useful
Give feedback Cancel reply
Lunar
calendar 2021
January February March April May June July August September October November December
Recommended entries
Low-growing late tomatoes
Low-growing flowers for the garden, blooming all summer
Wireworm in the garden: how to deal
What grass to sow so that weeds don't grow